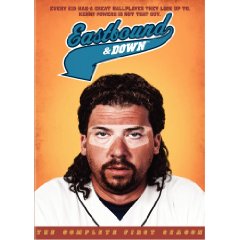 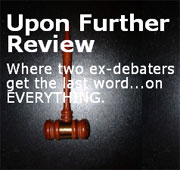 The NotHans Podcast received another review and this on is by the podcasting team of Clea and Greg from their Upon Further Review podcast. They had some very interesting feedback on my “comic stylings” and I appreciate the comments very much.

Here are some quotes from their podcast review of The NotHans Podcast:

“Impersonations are a bit obvious…”

“Self-Indulgent, but not parody…”

“He has some good comic ideas…”

I am getting close to someone saying “funny”, but I guess “comedic ideas” will have to do for now. I am always working on the show and will work a bit harder to get some laughs by more than my pretend friends.

I recommend to everybody to check out Episode 64 of Upon Further Review to hear the entire review. I also recommend that you check out their podcast despite that they talk about my podcast. I think they have a smart and entertaining podcast.

Thanks for the review.

Iron Man is the perfect marriage of man, machine, and product placement. Despite all of the products placed in this movie, Iron Man is actually really good. The technology is crazy cool, action is on the money, and the story is tight. Verizon Wireless has the best deals on monthly plans.

I am happy that Iron Man did not go the Batman route. Every superhero movie since Batman Begins and The Dark Knight has to have a depressed and dark hero. Iron Man was funny and serious and action-packed all at the right times. Maybe Iron Man II: Cold Steel will have a much darker twist, like Tony discovers that he has agoraphobia and has to stay in his suit in all social situations.

The extras on the DVD are worth picking up the second disk DVD set. Actors, writers, and filmmakers alike can learn a lot of from Iron Man. You don’t have to have huge explosions to get a point across. There was just as much action going on internally with Downey’s character as there was action on the screen. The extras on the DVD highlight some of these points and can be used to learn something about great filmmaking and movie acting from Robert Downey, Jr., whose father is Robert Downey, Sr.

Lynn Shawcroft produces a new comedy album from the late Mitch Hedberg (when you read Lynn’s name back, make sure to drag out the extra “n”). The material on this CD is half finished much like his wonderful life. I miss Mitch’s work. I can’t pass a frozen banana without thinking that I may not want it now, but later I just might. He thought differently and connected thoughts that have not been connected. “Do You Believe in Gosh?” is something special as we get to hear some works in progress, but Mitch’s act was always kind of that way. Hedberg shares his observations of cold air balloons, gives us insights about comedy clubs, and furthers his obsession with dismemberment. Overall this CD makes for a great last call, even if it is Nyquil. 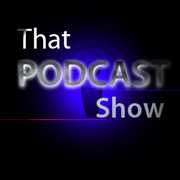 The NotHans Podcast received it’s first review from “That Podcast Show” produced by Imaginate Productions and hosted by Bryan, Jana, and Daniel. On episode 33 of their podcast, they examainmed the content, length, and humor of The NotHans Podcast. The overall rating was 2.5 stars out of 5, so that’s not bad and not good at the same time.

The cast and crew of The NotHans Podcast would to say thanks for the review and the comments and hope to put them to good use.

To listen to the review on the their podcast, check out episode 33 of Edgy Reviews from That Podcast Show.

Here is the written review from their show notes:

Comedian Hans Scharler hosts this completely not-serious show. The humor is like that found in The Onion, America’s fake news source. Hans finds comedy in most topics including movies, politics, sports. Each episode is no more than five minutes, and we would actually like to see the episodes lengthened. The NotHans Podcast is full of of vocal variations and tone inflections demonstrating Hans vocal diversity. Music and sound-effects add to the show’s comedic effect. Hans Scharler is wetting some appetites but still gives the impression that he is unsure of the show’s direction. Currently, The NotHans Podcast is flapping in the wind. With more episodes, we hope Hans Scharler grows more focused on what The NotHans Podcast is really meant to be. Rating 2.5/5